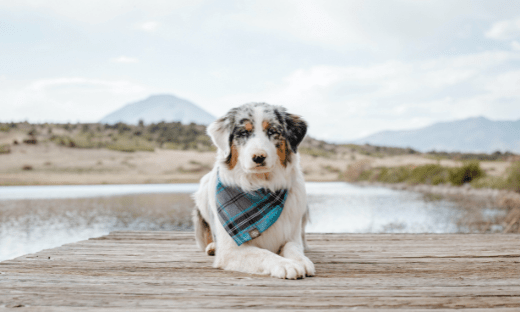 Australian Shepherd is an ideal breed for people who want their dogs to be tough, smart, ranch, slim and lean. ‘Active’ is the most appropriate word to describe this amazing breed. Australian Shepherds are extremely good–looking with patterns of contrasting shades of blue and red and their Irresistible wit is a Cherry on top of frosting.

They are also known for their brainy, tireless, and guarding sense. Australian Shepherds are competitively driven by a strong sense of impulse. To a great extent, this is super helpful but you want to keep training them in a manner where they don’t over-rely on their impulsivity.

Through this article, we’ll be suggesting a few interesting names that will absolutely fit your Aussies’ intriguing personality.

Even though dog naming is not a complex process, we often find ourselves in a constant loop of questions like “How do I give my dog a good name?” “Are there any extra details I need to know in order to do that?” “Why do I even need a name?”. We’ve covered these queries with some simplest solutions for you in upcoming paragraphs, make sure you don’t skip through if you want your dogs to love their names. Ps: We have got you throughout the entire process.

The Need Of Naming Your Dog

Animals aren’t born with an associative – mentality like humans, whenever you’re getting yourself a new pet it becomes extremely important to understand the fact that they are just not Alike you, yes there might be some personality traits you like in them or they might like in you, you might train them to be of an obedient, understanding nature but certainly, their minds aren’t wired to recognize themselves as a dog or a cat or a fish, giving them a NAME OF THEIR OWN, helps them to generate a sense of Individuality, they recognize themselves as that name. Here are a few in-depth advantages of naming a Dog.

Coming back to the names reference, here are 240 names for your sharp and bold Australian Shepherds.

We hope you like these tiny little chunky names for your Aussies, coming back to share a little more information about naming your Dog, here’s a little nutshell of tips you need to keep in mind while naming.

Things To Keep in Mind While Naming Your Dog / How To Choose a Better Name?

Naming a dog is once for all deal. You don’t want to change your dog’s name all over again, time to time which eventually will confuse the dog. Therefore keeping the right things in mind becomes severely important through this process. Here’s our take on how you can name your dog.

So keep patience and don’t just panic when you see the options, have faith in your choices.

Here are some short and sweet mystical names

With the hope that one of these names would be a great fit for your Dog, we summarise the text here. Keep your choices clear, concise, make sure you don’t overhaul yourself and your dog will love any name given affectionately.